Target date funds (TDFs) have been a big hit among both participants and sponsors of defined contribution plans. From 2008 to 2017, the percentage of participants using TDFs when offered grew from 37% to 77%, and as of 2017, 54% of contributions went to TDFs. But given the variety of off-the-shelf and customized TDF solutions on the market, how should plan sponsors evaluate the risk level of a TDF?

In 2013, the Department of Labor advised plan sponsors to establish processes for comparing, selecting and reviewing TDFs, emphasizing the importance of considering population characteristics. Aon believes some of the most relevant factors include the availability of a defined benefit plan (DB), the population’s longevity profile and retirement age, and human capital risk.

For participants, DB plans are like a low-risk asset: They produce a steady stream of income for life. If two participants are the same age and have equal DC account balances and asset allocations in the DC plan, but one also has a pension, then that participant is invested more conservatively overall. Furthermore, pension benefits can significantly extend the life of a retiree’s DC account balance by providing a floor of retirement income, thereby preserving the DC asset base. This implies a greater capacity to take risks in the DC plan to balance out the low-risk nature of the DB plan.

The impact on the shape of the glide path can be determined more precisely by looking at the size of DB benefits by age cohort. For example, if longer-service employees have grandfathered pension benefits while newer employees only participate in the savings plan, then the appropriate glide path might be more aggressive than average at older ages and more conservative than average at younger ages, leading to a flatter glide path.

Investors with a longer horizon can typically afford more risk. For workers at the end of their careers, the investment horizon is the expected retired lifetime. Healthier populations with longer life expectancies have longer horizons, and thus should take more risk. Other longevity-related characteristics include gender and job type. Assessing population mortality is common for DB actuarial valuations, and it can also be used to inform the risk level of a DC TDF glide path. 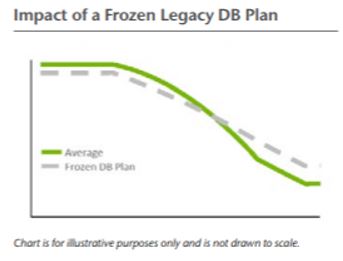 Workers can be thought of as having two different kinds of capital during their career: 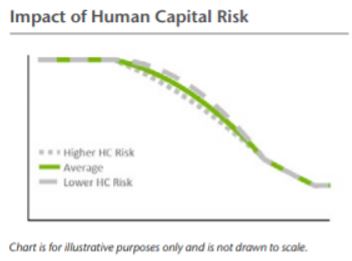 Reflecting Demographics in the Glide Path

While it may be new to many DC plan fiduciaries, reflecting population demographics has been standard practice in the DB space for decades, and has been part of the DOL’s guidance for DC plans since 2013. Plan sponsors can start by making some high level observations of their plan demographics; for example, the population has a DB plan, typically retires at age 62, and has higher-than-average job security. A more precise evaluation—which is not necessarily costly or difficult—can be done with more data, such as account balances and pension benefits by cohort. This can help assess the fit of different off-the-shelf TDF products or design a custom TDF glide path.

Whichever approach is taken, Aon can help plan sponsors document their process and repeat it periodically. As assumptions, methods, and the population change over time, so too can the TDF glide path. For example, a population with a frozen pension plan might warrant an aggressive glide path today, but perhaps a more moderate glide path in the future as employees with pension benefits retire. The choice of glide path risk level isn’t permanent—it can and should be reviewed to make sure it continues to fit the population.