Nearly three years after Canada became the first major economy in North America to legalize marijuana for all uses, the initial sky-high projections of a “green rush” have yet to fully materialize.[1] Instead, the nascent cannabis industry—including, among others, growers, producers, distributors, and retailers—has had to contend with a patchwork of regulations, unforeseen risks and growing pains, many of which were compounded by the COVID-19 pandemic.

The Canadian experience can offer useful lessons on some of the critical risk exposures and challenges of an emerging cannabis industry. 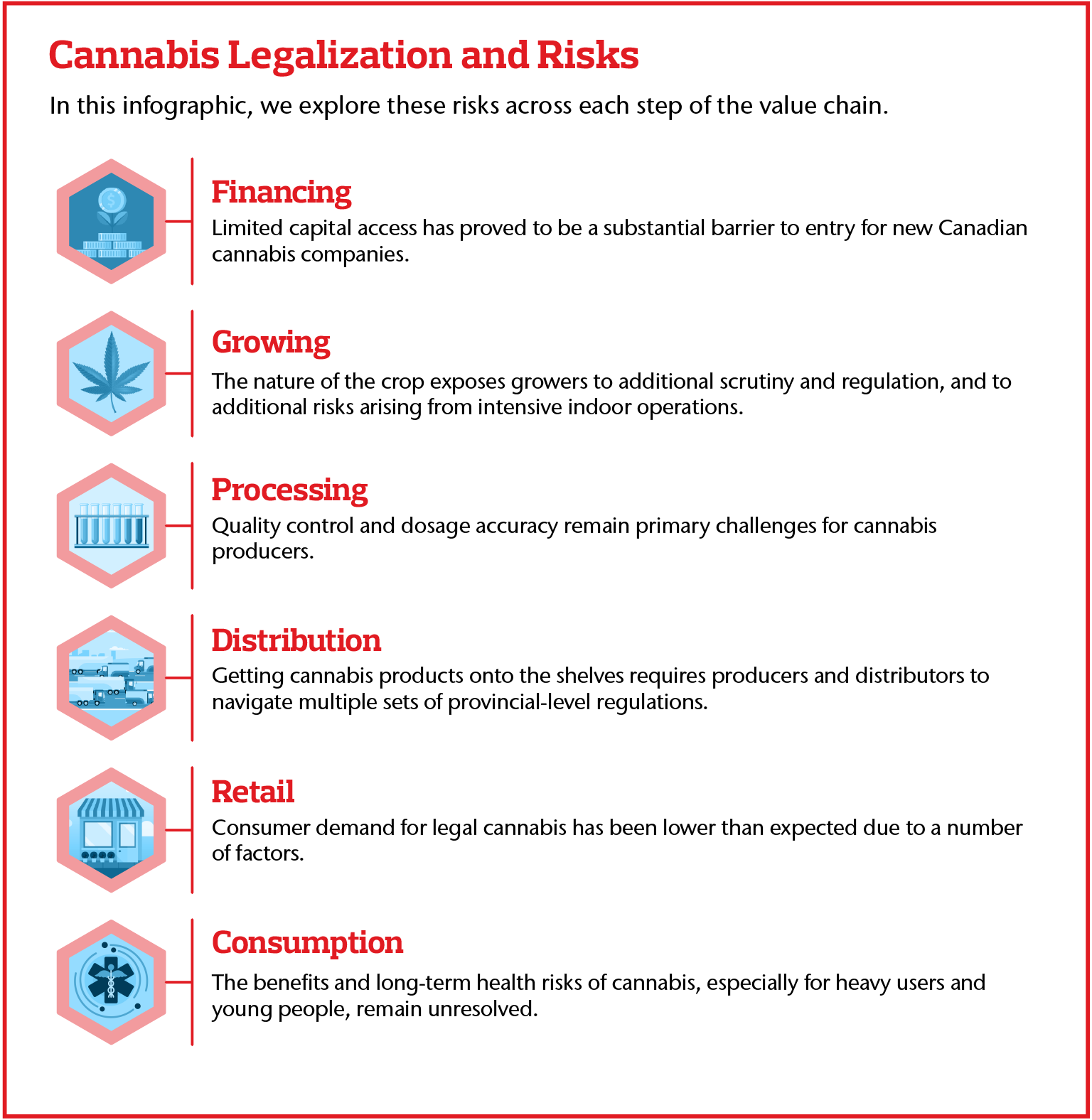 At its core, marijuana cultivation is an agriculture business; the risk coverage required for growing marijuana is somewhat similar to that of any other greenhouse operation. However, the nature of the crop also exposes growers to additional scrutiny and regulation, and additional risks arising from intensive indoor operations. For example, marijuana growers in both the U.S. and Canada are required by law to implement stringent and often expensive security measures, which can include sophisticated video surveillance, access control to buildings and grow sites, and strict record-keeping protocols.[3]

Quality control and dosage accuracy remains a primary challenge for cannabis producers. Compared to substances like alcohol and tobacco, the science of extracting and measuring the exact amount of THC in a cannabis product is still imperfect.[4] Some Canadian consumers have also complained about the inconsistent quality of legal marijuana, which may be the result of producers still refining the techniques required to produce cannabis in mass quantities.[5]

Getting cannabis products onto the shelves requires producers and distributors to navigate multiple sets of provincial-level regulations. In Canada, each province has retained the autonomy to determine how cannabis is bought and sold within its borders, resulting in a patchwork of policies that are subject to frequent change, as well as structural inefficiencies that have added unnecessary complexities to the industry. The initial rollout varied significantly across provinces, with some limiting cannabis sales to a handful of government-run liquor stores and others providing unlimited licenses to privately-run dispensaries.[6]

Consumer demand for legal cannabis has been lower than expected due to a number of factors. Legal marijuana often competes with a thriving black market, and Canadian federal regulations allow individuals to legally grow marijuana in their own backyards.[7] The government has also set wide-ranging restrictions on how companies can market and advertise cannabis products—including prohibitions on health claims, testimonials, and any packaging or labeling that might appeal to youth.[8] And while the legalization of cannabis happened quickly, there are still pockets of moral concerns and stigma surrounding the sale and consumption of marijuana.

The benefits and long-term health risks of cannabis, especially for heavy users and young people, remain unresolved.[9] Canadian legalization has created both a critical need and a clear opportunity for additional scientific research on the topic, the results of which will play an important role in determining the future of the legal cannabis industry. Long term product liability exposures, due to the current claims-made coverages, rest solely with the manufacturers.

[3] “Physical Security Measures for Cannabis: Requirements under Part 4 of the Cannabis Regulations,” Government of Canada

[5] “Stoners cheered when Canada legalised cannabis. How did it go so wrong?” Guardian

[7] “The legal stuff is garbage’: Why Canada’s cannabis black market is thriving,” Guardian

[9] “Weighing the dangers of cannabis,” Nature