Through mid-summer 2022, the Atlantic hurricane season has been relatively quiet, with just three named storms. Those who predict the volatility of the season, however, remain steadfast in their models that the 2022 season will still be active.

Colorado State University, in its August 4 updated extended forecast,[1] maintains an above average Atlantic basin hurricane season.” According to the National Oceanic and Atmospheric Administration (NOAA), an outbreak of Saharan dust has hindered development of storms blowing off the African coast, where they typically develop in the early months. However, all the key ingredients remain in place for an active season, including abnormally hot water in the Atlantic and Caribbean (+30 degrees Celsius) and an ongoing La Niña.

La Niña, the cool phase of the ENSO (El Niño-Southern Oscillation) climate pattern in the equatorial region of the Pacific Ocean, persists for an unusual third-straight year. That is a recipe for heightened activity and a reason that risk managers in hurricane-prone areas should make windstorm resilience a high priority.

“When ocean waters in the central and eastern Pacific Ocean are running cooler than average then that’s when you get an official declaration of a La Niña phase of ENSO, which leads to conditions that are less favorable for tropical cyclone activity in the Pacific Ocean, but more favorable in the Atlantic Ocean,” says Steve Bowen, managing director and head of catastrophe insight at Aon. “A La Niña phase correlates to warmer ocean waters and a relaxation of trade winds, allowing storms more opportunity to organize and develop in the Atlantic.”

El Niño conditions, when the waters of the Pacific warm, tend to deliver milder Atlantic hurricane seasons. However, the difference between frequency of La Niña and El Niño conditions is stark:

Reasons behind each of these weather facts remain a point of research for experts. However, with increased landfalls under La Niña conditions comes increased damage costs. Catastrophic storms, however, can strike in any conditions, whether it is La Niña, El Niño or the neutral phase. The record-shattering 2005 hurricane season that included Katrina and Rita occurred during the neutral phase. Our recommendation is to always have resilience measures built into the risk management plans of your hurricane-prone properties.

The Peak of the Atlantic Hurricane Season Has yet to Arrive

Historically, the Atlantic hurricane season kicks into a higher gear in August, peaking around September 10 before officially coming to a close on November 30.

“Just because it has been quiet so far doesn’t mean that it will be quiet for the rest of the season,” Aon’s Bowen says. 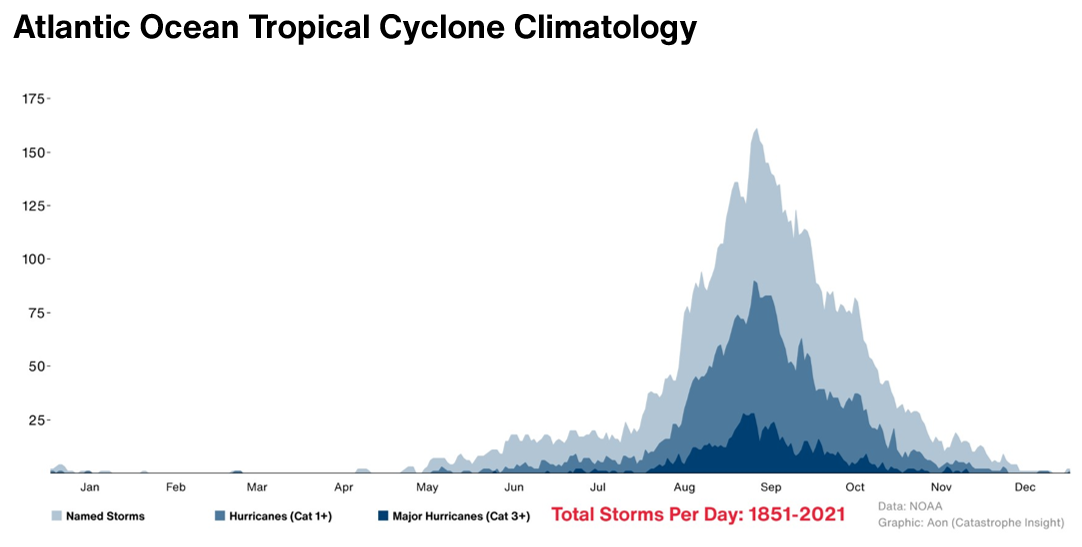 If your business or critical suppliers are located in hurricane-prone areas, take control of your risk by making sure windstorms are included in your business continuity plan. The advanced planning and preparations will help mitigate a storm’s impact and continuity of your crucial business processes. Flexibility and clear, frequent communications will be key in successfully responding to events as they occur.

We recommend incorporating these steps when building and reviewing your response plan: