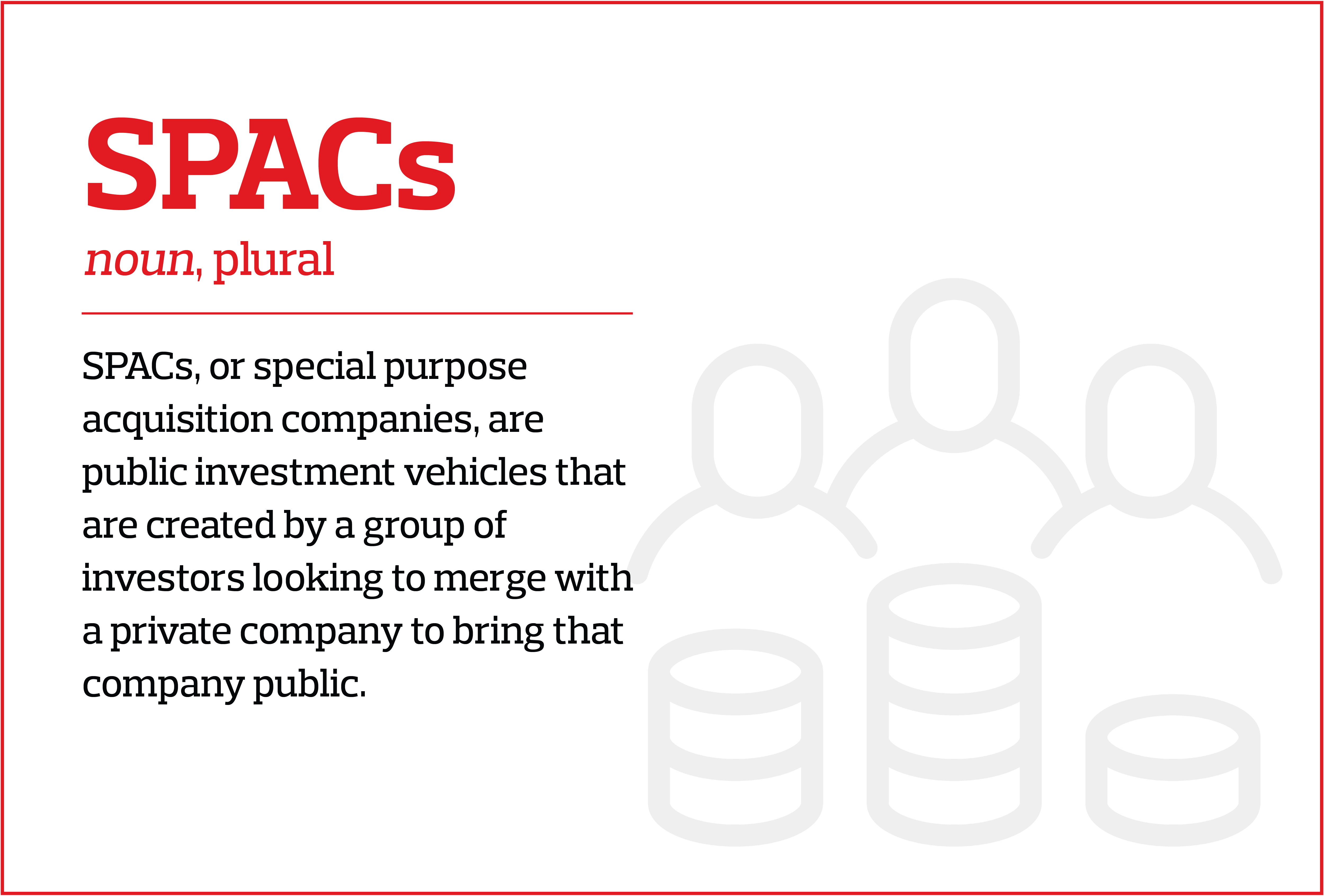 SPACs, or special purpose acquisition companies, are public investment vehicles that are created by a group of investors looking to merge with a private company to bring that company public. SPACs aren’t a new concept, having been around since the 1990s. Recently, however, there’s been a boom in interest in them.

The growing interest in SPACs is driven by complementary forces. On the one hand, many businesses, particularly in the technology sector, see them as a faster, more efficient and less cumbersome way to take a company public than by a traditional initial public offering (IPO). On the other hand, investors are looking for a new source of yield. This year had already seen 366 SPACs raising $112.7 billion by early July, according to SPAC research.

Of course, with the rise in SPAC activity comes an increase in SPAC litigation. In the first half of 2021 there have been 14 new securities class-action lawsuits involving SPACs, with more than half alleging that potential targets defrauded investors by misrepresenting their product’s viability,  according to the Stanford Law School Securities Class Action Clearinghouse, which began tracking SPAC filings two years ago.[2]

While it is true that there has been an increase in lawsuits, managing the SPAC process properly can reduce the risk of litigation. It can also increase the chances of achieving a positive result from a SPAC deal placement. If risk management efforts are included in the narrative at underwriting meetings, those involved in SPAC transactions can help secure comprehensive directors and officers (D&O) coverage to transfer risk.

The Rise of SPACs

In recent years, SPAC structures have evolved in ways that make them more attractive to private companies looking to go public.

In its early stages, a SPAC raises funds from investors through its own IPO. When it identifies an acquisition target, it enters into a “de-SPAC” transaction after appropriate due diligence, typically acquiring the private business with cash or SPAC equity. This essentially takes the private company public in the process.

Part of the reason for the increase in SPAC litigation is the sheer increase in the number of transactions. In some cases, transactions might have been premature — before a target company was ready to go public. But an entrepreneurial plaintiff’s bar noted that increased interest in SPACs from the U.S. Securities and Exchange Commission (SEC) is likely a factor in the increase in litigation as well.

In fact, the SEC announced in mid-July 2021 that it had reached a civil settlement in a case about a SPAC transaction involving a start-up space company. Regulators contended that investors had been misled about the state of the acquisition target’s propulsion system because the SPAC fell short in its due diligence.

Other recent examples of SPAC litigation include class action cases and securities lawsuits alleging that SPACs disclosed misleading or inadequate information about acquisition targets; submitted incorrect accounting for warrants; and violated securities laws. These cases were usually brought to court by shareholders and investors.

With an increase in litigation comes a potential increase in D&O claims because SPAC leaders find themselves among the targets of lawsuits. Those increased claims could very well contribute to further pricing impacts for SPACs and de-SPACs in the D&O market.

Litigation around SPACs can typically be grouped into three categories:

The second and third types of litigation — around the de-SPAC transaction or after the de-SPAC process — have proven to be the most common. Most post-transaction litigation is typically filed in federal court and comes with significant defense costs or sizable settlement amounts that are often in the tens of millions of dollars or higher.[3] Litigation in state courts, particularly in New York, typically involves merger objection cases that attempt to prevent transactions from moving forward.

D&O coverage generally responds to SPAC-related litigation in the same way it would to a lawsuit involving traditional IPOs, though there could be additional complexities regarding a SPAC deal.

Coverage disputes regarding the de-SPAC transaction are a potential source of problems, with post-transaction claims being particularly complex. Post-transaction, there may be up to three D&O policies in place: a SPAC runoff policy, a policy covering the de-SPAC public entity, and a runoff policy for the formerly private company. There might also be a D&O policy for the new public company going forward. In that environment, it is possible that multiple policies will be needed to respond to post-transaction litigation. In this complex framework, it is essential to make sure there aren’t any gaps in the coverage among the various policies.

There are also different considerations when approaching D&O markets for SPACs versus de-SPACs. For a SPAC, D&O underwriters focus on issues such as, but not limited to, potential conflicts of interest, warrants allowing investors to purchase additional shares, management and the board’s due diligence experience, details of the target search, and the experience needed to make the right decisions regarding acquisition targets.

For the de-SPAC, underwriters look at, among other things, whether the company is ready to conduct itself as a public company; they also look at its financial strength and its ability to execute on its financial vision. In both cases, the bottom line is demonstrating strength in those areas to underwriters.

While D&O underwriters have grown more comfortable with traditional IPOs, many are still analyzing the potential risk exposure for SPACs and de-SPACs. 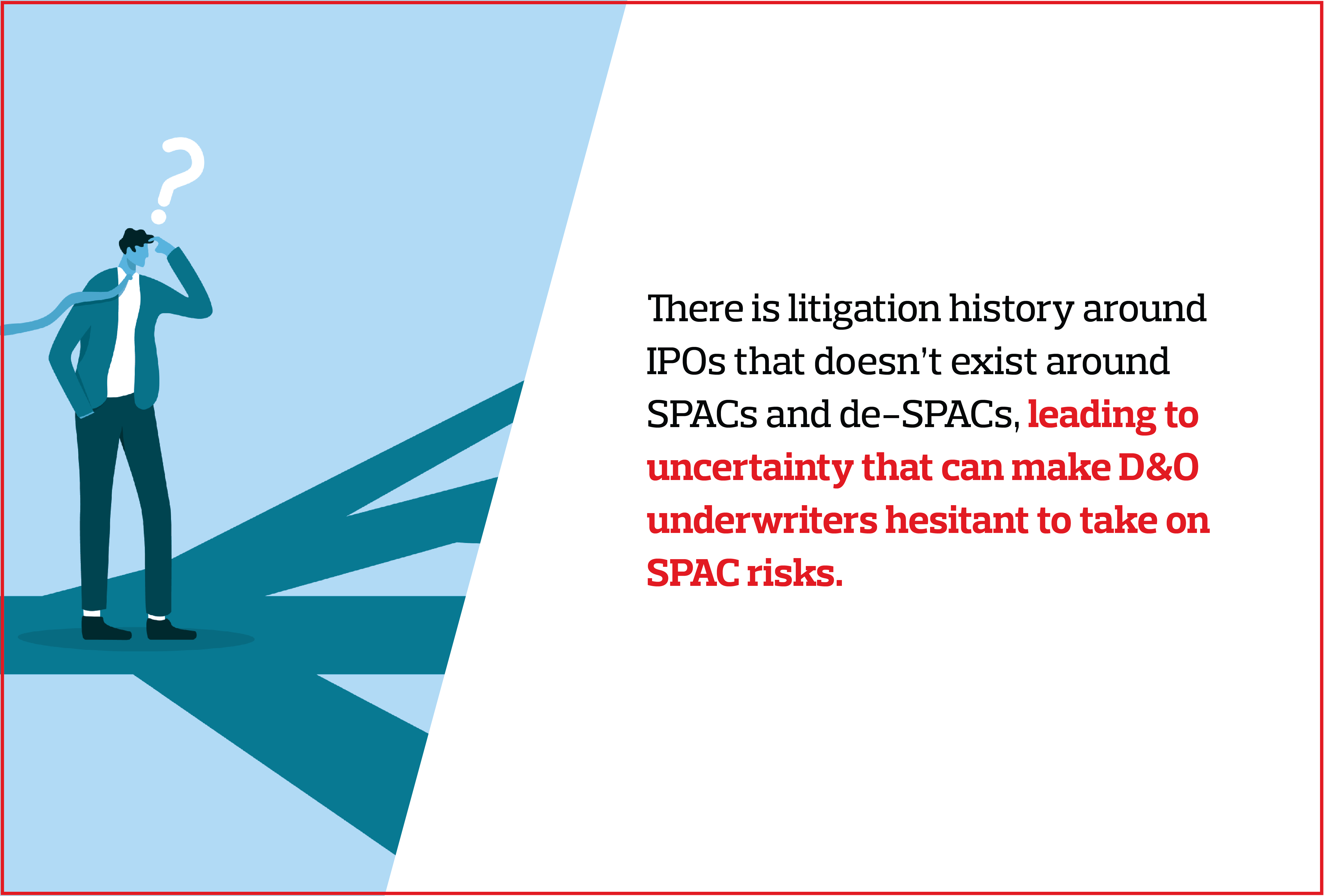 There is litigation history around IPOs that doesn’t exist around SPACs and de-SPACs, leading to uncertainty that can make D&O underwriters hesitant to take on SPAC risks. Given that uncertainty, those looking to purchase D&O for SPACs or de-SPACs need to position themselves favorably in underwriting meetings; such meetings are a critical opportunity to showcase the company and its management to underwriting teams. The key is to differentiate a given SPAC or de-SPAC from others in the same space, particularly from those involved in litigation. For example, leaders can do so by demonstrating a lack of conflicts of interest, explaining their due diligence experience, sharing their history identifying acquisition targets and executing transactions and, on the de-SPAC side, showing public company experience.

SPAC litigation exists, and it is increasing as SPACs become more popular. But organizations that understand the factors contributing to litigation can take steps to address them and help manage risk. Then those organizations can showcase their efforts to D&O markets to help secure coverage across the SPAC life cycle.