Hedge funds today look nothing like they did in the 1990s—and their returns don’t either.

Hedge funds first started to gain investors’ attention in the early 1990s. Hedge Fund Research (HFR) estimates that the hedge fund industry managed $38.9 billion in 1990 and $456 billion by the end of that decade. The average fund size was $111 million in the 1990s, and many were not far from the proverbial two people and a dog running the business from their garage.

But returns for hedge funds over those 10 years were outstanding. 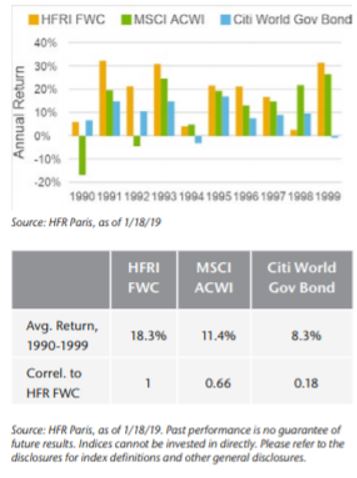 Not only did hedge funds handily outperform both equities and bonds through the 1990s, their correlation to equities was modest and to bonds was very low. Adding them to a portfolio both reduced risk and enhanced returns.

Hedge fund industry AUM grew from $456 billion at the end of 1999 to $1,87 trillion by the end of 2007, per HFR. Returns over this period were also attractive, particularly versus equities, although perhaps not quite as good as the previous decade. 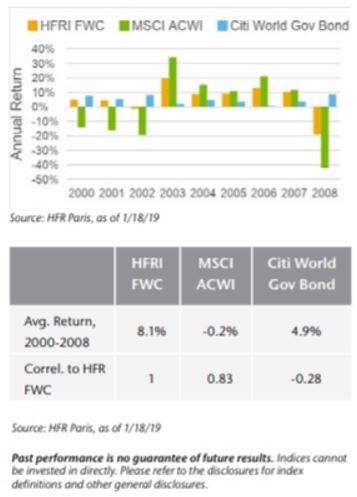 Hedge funds managed small gains in the 2000–2002 equity market selloff and returned over 8% annualized from 2000 to 2008. They had a down year in 2008 amid the Global Financial Crisis (GFC), but suffered much less than stocks and still looked attractive over longer periods.

The GFC, however, resulted in central banks around the world taking action to prop up markets and suppress volatility. Governments constrained the market’s “invisible hand” in ways that made it tough sledding for hedge funds.

The number of hedge funds also grew from 3,100 to 8,300, and the average fund size grew to almost $400 million. It is not hard to imagine that some of the strategies that worked well in the 1990s were no longer impactful, with seven times as many dollars chasing those opportunities. Hedge fund returns for the past 10 years have reflected this change. 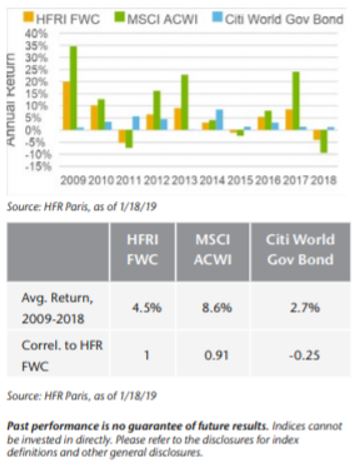 Hedge fund returns for this period appear lackluster when compared to those from the 1990s and less attractive than during the 2000–2008 period. And while they managed to beat bonds, hedge funds have trailed equities for the past 10 years.

We draw four conclusions from this analysis:

There are, of course, other risks that come with investing in small funds pursuing unusual strategies—but we believe that, if managed carefully, these risks are well compensated. Aon has developed a lineup of these emerging managers that we believe represent an attractive opportunity for some investors.